I've just added all the versions of HMS Devonshire that operated during the war.

Click here for details and images.
I'm going to be adding similar versions for the other ships in the class. If you are interested in one please get in touch as I might have already done it but not had time to update the blog.
at April 23, 2022 No comments:

I've finished the update on: 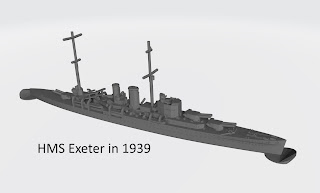 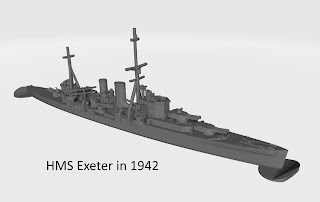 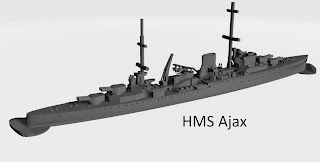 Ajax and Achilles are historically distinct

All available with or without base and/or as a battle set of all four (River Plate)
at March 03, 2022 No comments:

A quick overview of what I'm currently working on

Personally I use the 1:1800 planes for deck aircraft on carriers etc and the 1:1200 for aircraft in flight. Having them slightly larger works better for me as they look like they are to scale even though they are too big. Anyway you can pick whichever scale you prefer.

Please ignore the models on a flat base, I have replaced these with the flight stand models/

All models are on a flight stand (fighters are two to a stand, bombers etc are singly based). If you want to use them on the ground just snip them off!

(# in brackets = number of aircraft unless stated otherwise)

I decided to try the Java Sea scenario from the Mongoose Victory at Sea version 2 Play test rules (available from their forum http://forum.mongoosepublishing.com/viewtopic.php?f=84&t=121849 )
and using my 3D printed ships (available from www.gumroad.com/magpiedesigner). These will be available from 23/7/2020.

Please excuse the quality of the painting, I had to rush to get these pictures as it was due to rain the next day and I can only set up outside at the moment.

Scenario special Rules
Knowing how devastating the Japanese Long Lance Torpedoes can be I decided that they would use up one reload with the Japanese ‘Fan Salvoes’ special rule. This says that after the scenario is set up each ship can fire a full salvo of Long Lance Torpedoes. They then roll a d6 for each ship firing, hitting a random target on a 6. Its not clear if you also apply the ‘Long Lance’ special rule which says that at ranges greater than 20” you must confirm any hits by rolling a 6 on another dice. I applied it as during the real battle they launched 92 torpedoes in this type of attack and only got one hit! In this case all the torpedoes missed. 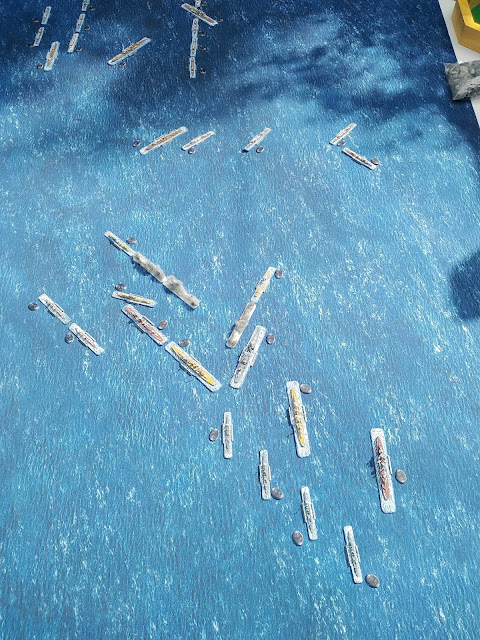 The ABDA force destroyers started by laying a smoke screen to try to protect the capital ships while they closed the range. The two Myoko class Cruisers greatly outgunned every ABDA ship. However, as the Japanese have the initiative (meaning they move there ship after an ABDA ship) and more ships (meaning they can always move extra ships after all the ABDA ships) Haguro managed to find a line of sight to De Ruyter and opened up. De Ruyter took four hits including 2 critical’s. The ABDA capital ships tried to target the closing Japanese destroyers but caused few hits as destroyers are very hard to hit. A Japanese destroyer tried a long range Torpedo attack on HMAS Perth but when the odds were calculated it needed a 7+ (on a d6) to hit so missed. No pre measuring.
In the end phase De Ruyter repaired one of the critical hits. 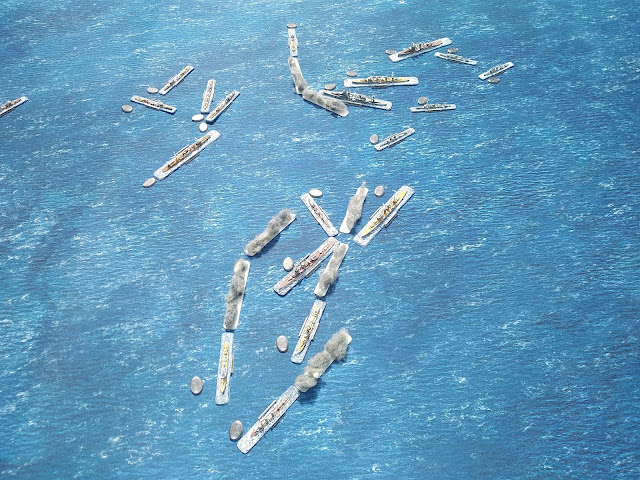 At this point I remembered a scenario special rule that says that until an ABDA cruiser is crippled Japanese destroyers have to stay within 6” of their own cruisers. I’d ‘kinda’ done that.
The ABDA smoke screens were very effective this turn with only the USS Aiden managing lucky hit on Jintsu.
In the end phase De Ruyter managed to repair the rest of the critical damage. 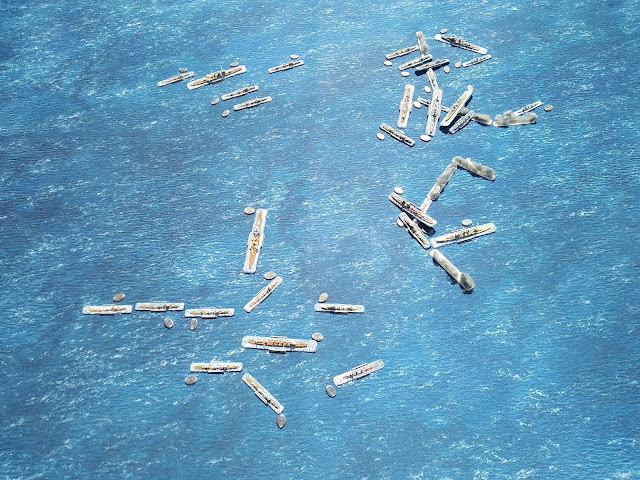 Although the smoke screen had protected the ABDA ships until now the range had also closed and this turn the Japanese managed to manoeuvre much better to open fire on the ABDA ships.
Jintsu closed on USS Houston firing 4 torpedoes at her, one of which hit causing 8 points of damage (from 23 total).
HMAS Perth then retaliated by torpedoing Jintsu which sank when two hit.

One of Jintsu’s destroyers (Hatsukaze) fired another torpedo into Houston rolling much better for damage causing her to sink.
HMS Encounter sank Tokitsuka with torpedoes
Haguro hit De Ruyter again crippling her and causing two more critical hits.
However, in the end phase De Ruyter again repaired some of the damage. 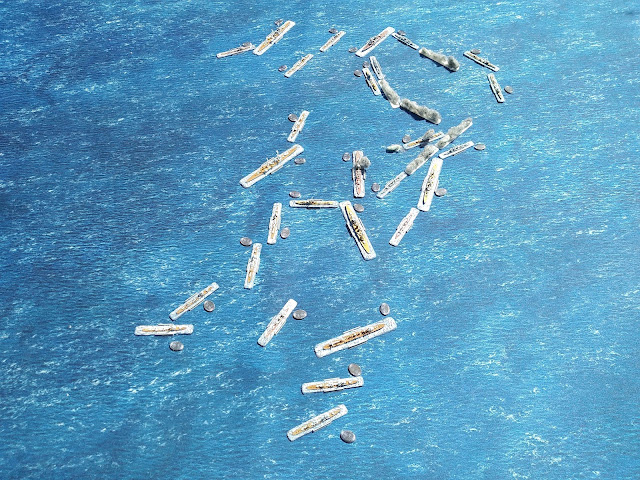 In a potentially devastating mistake Murasame elected to fire first and launch a torpedo attack on Exeter only to realise she had no torpedoes left on her starboard side!
However Exeter repeated the mistake by trying to target a destroyer which was closing in for a torpedo attack only to find her main guns could not depress enough! In the rules main guns can not fire at smaller ships at point blank range (7” for Exeter and the destroyer was at 6 ½”).
Nachi used her main guns on Perth crippling her, while her light guns finished off DE Ruyter.
Another mistake by the ABDA player (that would be me again!) as he realised HMS Jupiter was in a perfect Torpedo attack position on Nachi. Luckily it was his turn to fire and he launched 5 Torpedoes into the cruiser crippling her with two hits.
Another Japanese destroyer (Ushio) torpedoed and sank Java.
Yet another (Samidare) torpedoed and sank Exeter.


At this point I called it. All the ABDA main force had been sunk or crippled for the loss of one light cruiser and a crippled Nachi which was in a position to break off.
at July 23, 2020 No comments:

Battle of the River Plate

Just released a set of ships at 1:1800 scale to cover this famous battle. 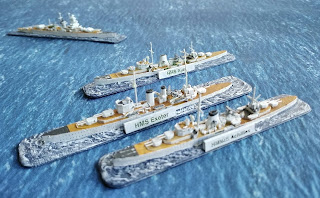 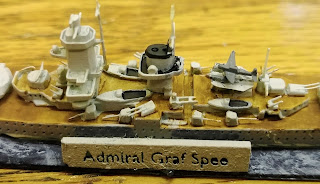 to go to my Gumroad shop
This will take you to my River plate battle pack, you can view my profile to see other products.
If you have a problem with combining postage let me know and I'll sort it out.
Please note this is a print on demand service and might take a few days for me to sort out. I'll contact you if there could be a delay in processing.